You are here: Home

Messages of Peace and Encouragement

We are so proud of Deng David Malok, one of our orphan's in a boarding school in Uganda. 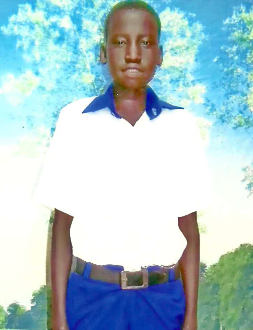 In his brief biography, David, at age seven, his father left for a military service and never returned home up to date, not even sure whether he is dead or alive. In 2008, his village was attack by unknown militia groups that result in kidnapping of his mother and younger sister. The fate of his mother and sibling is unknown to him, but most likely they are dead, he said.

Since David was the only surviving person in his family, and was in a vulnerable situation where he could not support himself he joined other orphans who are supported by church.

In 2009, at age eleven, David joined a refugee camp in Uganda where he started to learn the English alphabet from friends. In 2010, he began his academics in 2nd grade. As a brilliant pupil, he jumped to 4th grade in 2011. The following year he skipped 5th grade and went to 6th grade, by passing an exam. And, in 2013, he sat for his nationwide examination called Primary Leaving Examination (PLE) where he retained "Division Two" the grade that could only be achieve by exceptional students.

This boy has potential, and we would like to help him make his dream come true by becoming a medical doctor. This will also encourage other orphans to work hard. David has appreciated our support, thus we want him to stay on top.

There are more orphans who are longing for an education, and would like to follow the footsteps of their friend Deng David.

To become a participant/member of the "Restore Hope for South Sudan" peace initiative, click here.